My trip to Seattle and Kinokuniya – Part 1 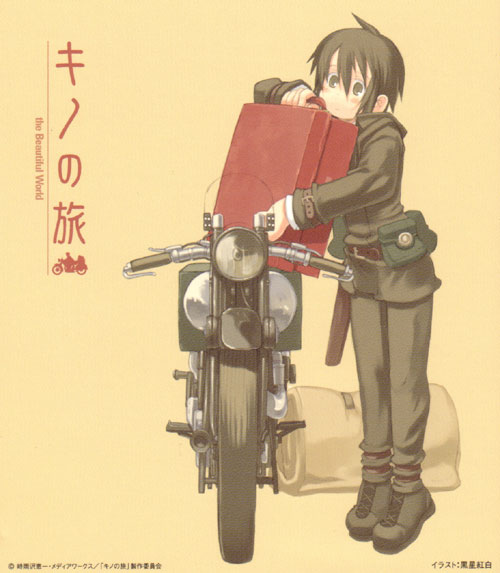 So, I mentioned last week that I went to Seattle with my parents for my summer vacation. Granted, it was only three days, but it was still fun and relaxing! Although the trip wasn’t long, I tend to talk a lot (and I had a lot of stuff in my mind as I was moving along). So, here’s my report.

Note: I took all of the pictures you will see below with my Samsung Galaxy SII, alternating between the default camera and Camera360. Don’t fault me for bad picture quality. Also, be prepared for dorky filters, because I like them. kthxbai.

And no, I did not use Instagram. Interpret that how you will.

Basically, got up at 6:30 in the morning and left at around 7:45to begin our journey. Thankfully, customs wasn’t a hassle at all (although the border line-up could have been better), and we passed through without much fuss. There’s no need to take pictures of this stuff, since it’s all fields of cows and grass and trees and…stuff. We would have arrived sooner, but we went shopping at one of the outlet malls in the US for about three hours, and had some delicious pretzels (which I did not photograph, because I was hungry).

There was a rather large line outside of the Coach factory outlet for some reason. Granted, there was a fairly good sale going on, but I have seriously NEVER understood the appeal of Coach. I think those “C”s they pattern all across their bags and wallets are the most ugliest things to be seen on handbags on the face of the earth. While they do do normal handbags, I just avoid spending any money on their products on principle. Plus, their bags are normally around $100~$300. At that price point, I’ll be inclined very strongly to pass, even with a discount.

I did go to the Gap and bought a few things, spending a fair deal of money. I needed new jeans anyway, and I generally prefer Gap over Old Navy, so there you go.

Anyway, we FINALLY arrive in Seattle in mid-afternoon, and by the time we check in and park the car, Pike Place is essentially closed. T_T There were still a few fish mongers kicking around, but everything I wanted to see that I remembered from last year was closed. SIGH. Since it’s around dinnertime, my family decides to look around for a spot for dinner, so we walk a few streets around the place before deciding to go back to Pike Place and eat at one of the restaurants there.

View of the bar a few steps away from where I was sitting.

View of the condiments and such. So much hot sauce…

So we find this nice seafood/sandwich place, with a very rustic (?) kind of atmosphere to it. I end up ordering some clam chowder in a sourdough bowl. It was GOOD! I have this weird habit of ordering clam chowder whenever I go to the US…weird, I know. However, I only do this when I’m within sight of the sea, as I have had bad experiences in Vancouver where I have ordered clam chowder only to realize it is not made in-house.

The clam chowder I ordered here, however, is delish. Yay!

After that, we walk around a bit more and find ourselves in a small market, buying a rather large apple strudel. But before that…

I finally found the cheese in an aerosol can! 😀 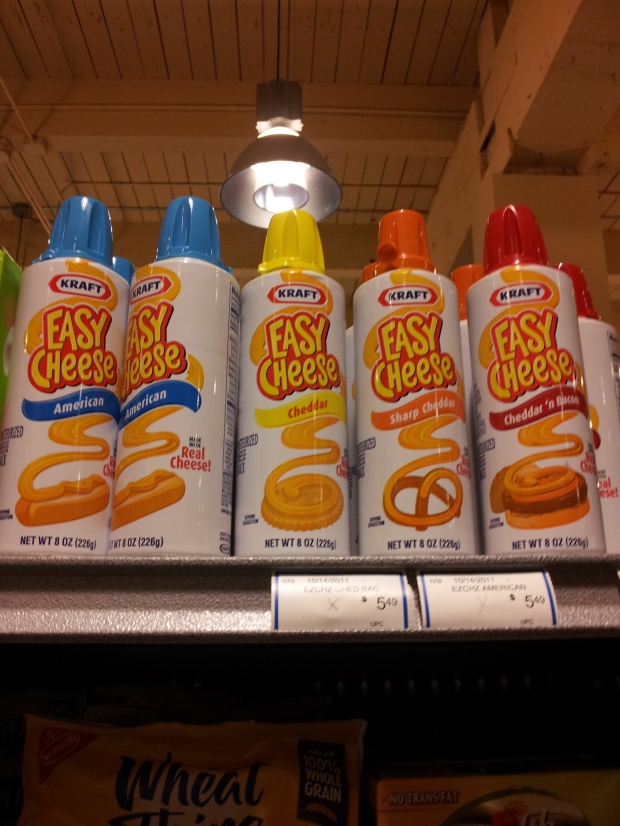 While it looks so-so in terms of price, I’ve had Cheese Whiz (cheese spread) before, and therefore opt not to buy any of this stuff. But hey, it was an experience (I guess?).

Thanks to my mother’s expert work in networking with friends (and stuff), we have four free breakfast coupons…for cold breakfast – a muffin, strudel-ish thingy and croissant. I can barely muster my enthusiasm. I know I shouldn’t be eating eggs and bacon EVERY DAY, but I’m on vacation. Come on, I wanna eat unhealthy food! D:< Worst of all, we eat breakfast at around 10:00 am, which doesn’t leave me enough time to be hungry again at lunch.

The first thing I find when I get in is CHEAP JAPANESE CANDY. 😀 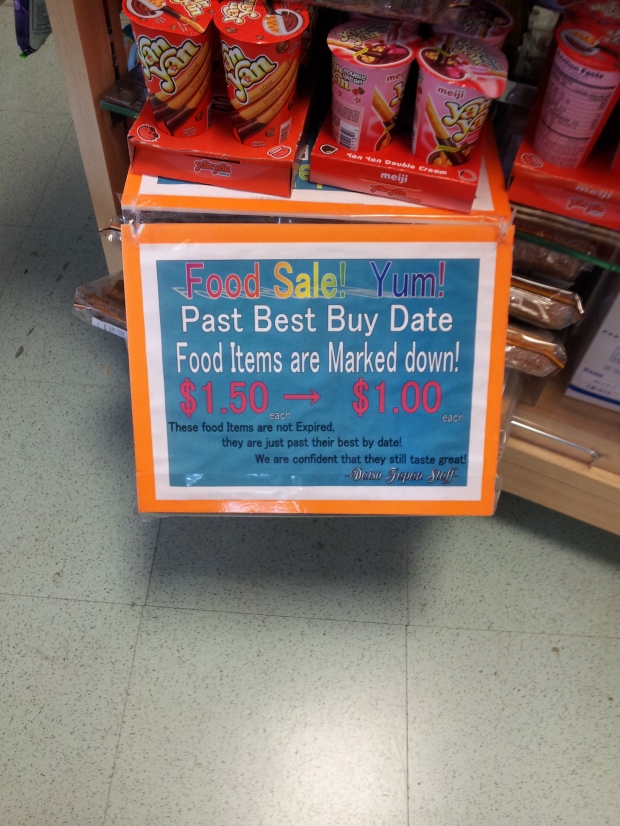 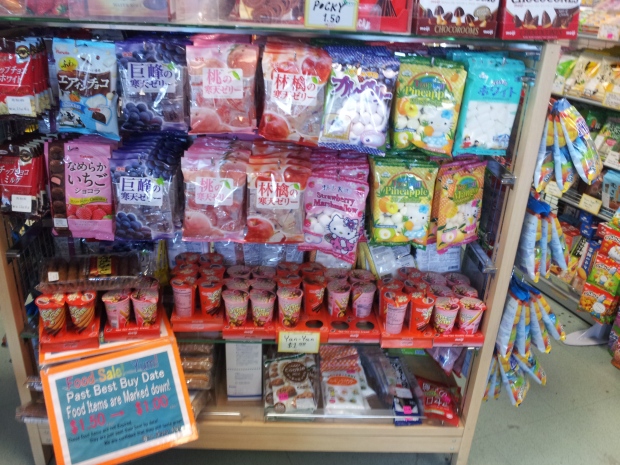 There’s this interesting candy that says it’s a marshmallow, but with different fruit filling in the middle – there’s a Hello Kitty one that says it has strawberry filling, but I decide not to buy it, and settle on the strawberry HAI CHU (or Hi-Chew) instead. For those of you who have never tried Hi-Chew, it’s basically like Starburst except more fruity and a bit less artificial-tasting…to me, anyway. But I like Starburst too.

The vibe of the Seattle Daiso is a lot more like a North American dollar store (which is basically what Daiso is, a dollar store, except in Canada, everything costs $2.) However, in the Richmond Daiso I usually go to, the premises are newer and more well-maintained and everything is super neat. There’s also a lot more selection in the Richmond one, since it’s two floors big, and is actually more than twice as large as the one in Seattle. So if you’re in Vancouver and want to go to a Daiso outside of Japan, I recommend the Richmond one. 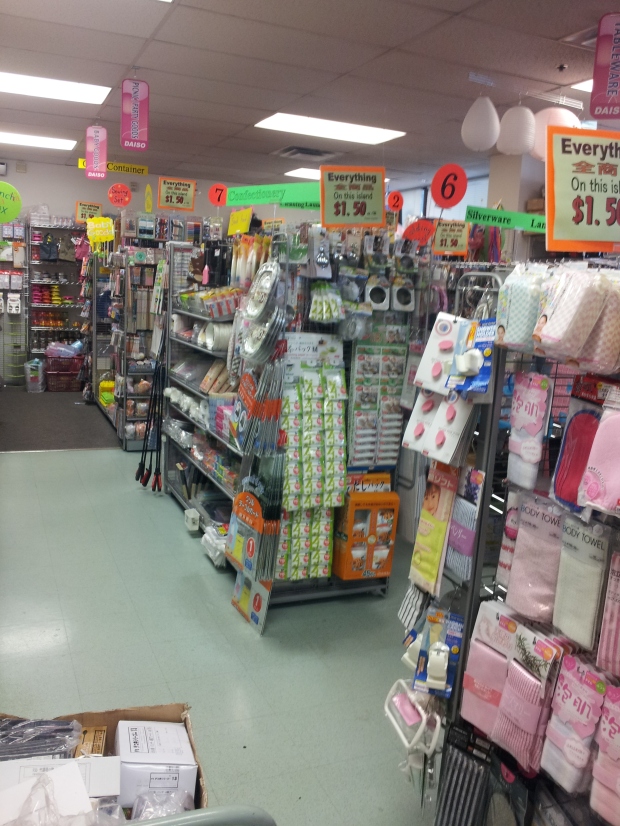 However, there are a few products I don’t remember from the Richmond Daiso…

I…I don’t even know what to say about this….

I’ve seen this in other places online, but this is the first time I’ve seen it IRL…

For those of you living in Canada, Uwajimaya is basically the same thing as T&T, except with more Japanese-made goods, and less fish smell (according to my mom). Also, there are no T&Ts in Canada WITH KINOKUNIYAS attached to them. BONUS!

The parts to follow are basically the highlight of my whole trip. Hang on tight!

For those of you who have never been to a Kinokuniya before, the thing you need to understand about the way the manga is organized is that it is organized by MAGAZINE, and within that, it is organized by AUTHOR. So basically, all the Hana to Yume manga will be in a specific spot on the bookshelf, and within that, all the manga by Takaya Natsuki (for example) will be together. Therefore, it is important for you to know what magazine the manga you want is published in if you want to find what you want without asking the clerk. Even then, they prefer if you give them the ISBN number. So yeah.

Also bear in mind that 99.999% of the manga in the Japanese manga section is wrapped, and if you open it, YOU HAVE TO BUY IT. Be careful. Same goes for the art books a few shelves over – while they do have a few samplers open, DO NOT OPEN THE WRAPPED ONES. Or you will face their wrath. Kind of. 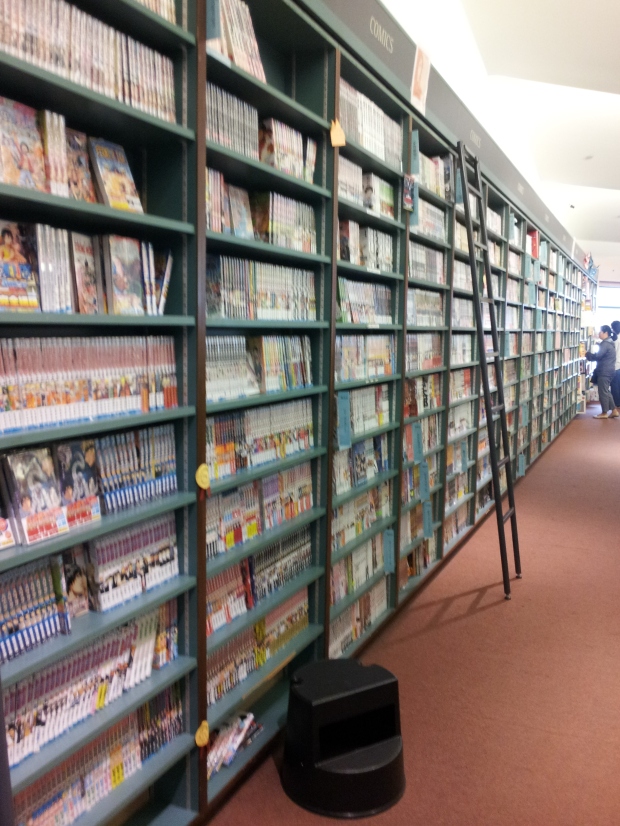 The manga. It goes on FOREVAARRR!!! 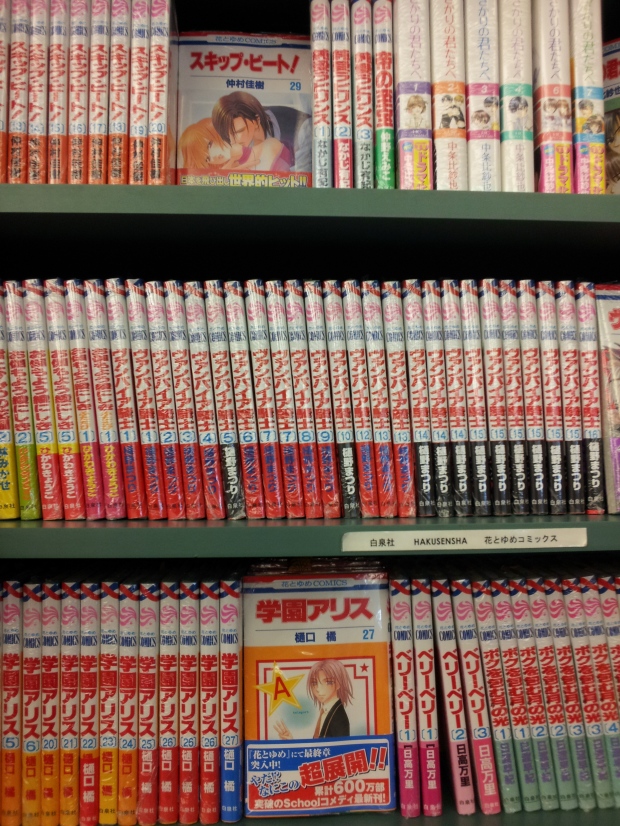 If I woke up and saw that THIS was my bookshelf, I would be thrilled. 😀

Magazines and whatnot. The Hana to Yume and the other stuff I actually care about are a bit further away though.

Along with a Japanese, Chinese and English-language manga sections, there’s also a rather large non-fiction section, with translated copies of Steve Job’s biography, The Audacity of Hope, among other books. There were also plenty of shelves dedicated to Chinese and Korean history and their relations with Japan. Reflection of the times, I guess. I was tempted to take a look, but was intimidated at the thought of words with upwards of seven or more kanji I wouldn’t be able to understand.

There was also this one book which detailed some foreign events of the past year, and it included some stuff about the U.S. primaries. I was sad to see Michelle Bachmann’s face in that book, but I guess such things are necessary. There was also some info on Iran and Israel as well, along with a sizeable section on North Korea. These are things that Japan needs to worry about, after all. 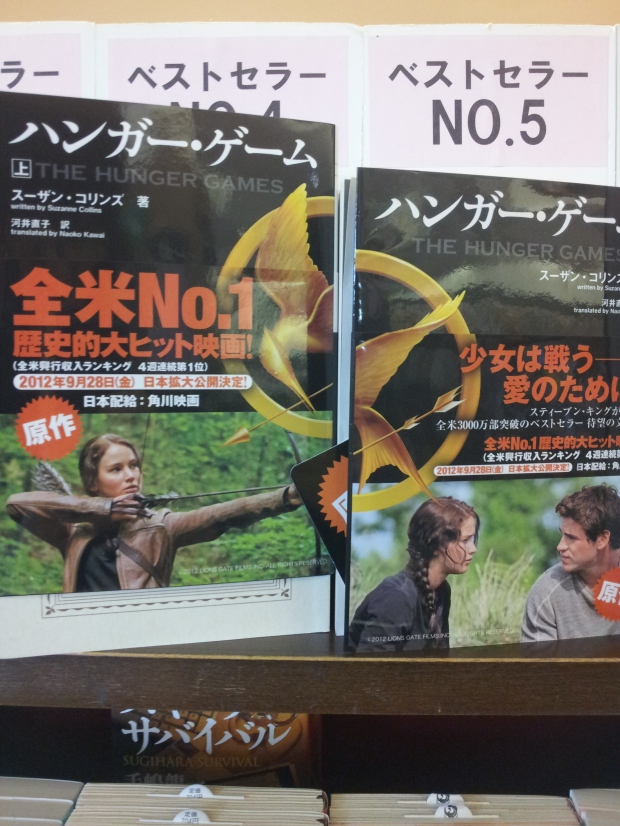 Hunger Games. It seems to be doing quite well, although I don’t know if the “bestseller” status applies in Japan as well as the U.S….

The last time I came to this Kinokuniya, the Japanese version of Twilight was rather prominently displayed with pictures of Maeda Atsuko…for some reason. Now I’ve noticed that they’ve filed it away somewhere else. YAY.

The light novels, however are upstairs, and they have a decent selection. However I couldn’t find the Kino no Tabi, so I chose not to buy any. They also only had volume 6 of Sukitte ii na yo, and I wanted volume one, so I decided not to go for that either…sigh.

There was also a CD section upstairs. The first time I came here, I was rather surprised to see that there was quite a bit of otaku goods – lots of Vocaloid CDs and whatnot. Also, big change from last year due to the fact that there’s a LOT less K-Pop on display – last year, there was a heck of a lot of After School, SNSD and KARA going on. Now, there’s a lot more Arashi, KAT-TUN and Ayumi Hamasaki on the shelves. And Perfume. I don’t know if this is a result of increased Japanese nationalism or not, but I was pretty surprised.

I was also surprised to see a few EXIT TRANCE CDs on display (a few of them CDs I really liked), and High and Mighty Color, which disbanded ages ago, which made my inner H&MC fan very, very happy 😀

CDs in the upper section. There’s a lot more Vocaloid in this picture than I remembered…or maybe I was still preoccupied with the shoujo section to notice :3

After exploring and jumping around like a happy fangirl, I went back to the shoujo section to figure out what I wanted to buy. My original plan was to get Sukitte ii na yo, Kino no Tabi and maybe some Hana to Akuma, but neither of the first two choices could be found. So in the end, I had to change my choices. Sigh. I am still incredibly happy with my choices (which I will detail in a later post, so stay tuned!).

Finally, for lunch.
Outside of the Uwajimaya, there are a few food places, and ALL OF THEM look AMAZING. There was this one Korean place in particular I was jazzed about, since they had dumpling soup (and I love dumplings AND soup – put them together and you have a winning combination!)

The thing is, I wasn’t hungry enough for lunch since I had eaten only two hours prior. Seeing other people with their dumpling soup, I noticed that they had a ton of side dishes along with their rather substantial soup, and I decided I wouldn’t be able to eat all of my $7.50 soup, and that it would probably be a waste of money. I instead opted for the kimchi fried rice.

I basically ate half of it before I took a picture. I FORGOT TT___TT

Some of you might say “wow kimchi fried rice, big freaking whoop” but I REALLY ENJOYED IT, IT WAS SO GOOD. I don’t normally eat kimchi on a regular basis, because I am forbidden from using kimchi in my cooking at my house (seriously), so this is really like a novelty food for me. It was SO GOOD. I’m looking forward to eating there again and getting some sort of delicious stew 😀

And…that’s all I’ll be posting for now.
BUT WAIT, THERE’S MORE!

STILL TO COME:
– My awesome trip of awesome to EMP.
– My first trip to Nordstrom, and my bafflement at the logic of the place
– Other random reflections
– What the heck did I end up buying? O_O

3 thoughts on “My trip to Seattle and Kinokuniya – Part 1”